Stefan Bargheer and I co-edited a special issue of the European Journal of Sociology (Vol. 59, No. 1, 2018) on the “Historical Sociology of Morality.”  We co-authored the issue’s introduction, and it contains contributions from a variety of scholars working in the field and my own contribution.

Abstract: This article argues that the transition between early-modern and modern organization of empires—especially the administrative outlooks and institutional logics used to govern them—revolved around how moral conflict was viewed within imperial organizations themselves and by metropolitan audiences. Early modern imperial organizations were deeply patrimonial, and hence relied on a style of embedded moral reasoning that distanced and segmented their affairs from the metropole. By contrast, modern empires order what they govern in hierarchies that are nominally objective and whose criteria seem universal. Using a case study of the British Empire’s crisis and transformation at the turn of the 19 th century, I argue that modern imperial administration emerged because networks of moral justification, which provided the scaffolding for patrimonial early-modern empire, eroded in the face of “disinterested” metropolitan scrutiny. This scrutiny created an audience for bitter political and moral conflicts among imperial administrators, who then used disembedded moral claims to mobilize support.

Abstract: Most scholars think state administrations vary because rulers attempt to maximize resource extraction given pressure from interstate competition and as constrained by the social structure of the societies they govern. This perspective cannot account for variations in British colonial tax administration in India from ca. 1770 to 1855. The British organized land revenue collection and administration as a whole through two different schemes. Both systems initially adopted a rhetoric of revenue maximization, but neither was decisively better matched to Indian social structure. Instead, administrators interpreted a seemingly opaque Indian society by understanding themselves as fundamentally similar to or different from Indians.

Abstract: Field analysis and – the relational approach to historical social-scientific explanation of which it is an instance – helps illuminate the administrative dynamics of empires. While most studies of imperial dynamics emphasize the ‘high imperialism’ of the nineteenth and twentieth centuries, this article extends field analysis to a crucial case from the second half of the eighteenth century: the English East India Company’s transition from a (largely) merchant trading company to a territorial power. In this disordered space of administration, officials struggling with one another for metropolitan recognition provided moral accounts of themselves which, on the one hand, explained their behavior in terms drawn from abstract, purportedly universal social spaces, and, on the other hand, claimed credibility through a personal ‘interest in disinterest’. I argue that these moral accounts helped delimit the boundaries of and shape the dynamics within a distinctively imperial administrative field. To analyse this transformation, I suggest a synthesis of three varieties of relational analysis: Bourdieu’s field theory, Fligstein and McAdam’s analysis of strategic action fields, and Padgett and Powell’s work on network folding and robust action.

Abstract: This paper considers the East India Company’s emergence as a territorial power from the 1760s until the revocation of most of its commercial functions in 1834. While this period has been a key episode for historians
of the British Empire and of South Asia, social scientists have struggled with the Company’s ambiguous nature. In this paper, I propose that a profitable way to grasp the Company’s transformation is to consider it as a global strategic action field. This perspective clarifies two key processes in the Company’s transition: the enlargement of its territorial possessions;
and the increased exposure of its patrimonial network to intervention from British metropolitan politics. To further suggest the utility of this analytic perspective, I synthesize evidence from various sources, including data concerning the East India Court of Directors and the career histories of Company servants in two of its key administrative regions, Bengal and Madras, during this period of transition.

Abstract: This commentary places Jussim (2012) in dialogue with sociological perspectives on social reality and the political-academic nature of scientific paradigms. Specifically, we highlight how institutions, observers, and what is being observed intersect, and discuss the implications of this intersection on measurement within the social world. We then identify similarities between Jussim’s specific narrative regarding social perception research, with noted patterns of scientific change. 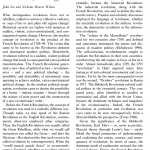